Our Table's Better Than Your Table

Our Table's Better Than Your Table

I love getting my teeth stuck into a good project. Especially if it's a bit unusual! First off I did some research into UK road signage, what fonts they use, corner radius size, the exact colours etc and got those dialled in. Then after deciding what size we wanted to go for I mocked something up in Illustrator. Here's what I came up with;

I then got in touch with a company that makes signage for Motorways in the UK and ordered a two metre by one metre sign to be made. To give it the 'authentic' look the sign's covered in something called RA2, which is the standard 3M reflective vinyl that is used for public highway signs. Swanky.

Next I needed to look at how I'd make the frame section of the table. I looked at a load of different commercial tubing and mounting options, and settled on Scaffolding tube. If it's good enough for a building site, it's good enough for our morning meetings. And it's got all that 'quirky industrial hipster vibe' going on too, so that's probably a plus. After doing some highly un-technical drawings and making some rough measurements I placed an order and waited for the goodies to arrive. Did you know, by the way, that the average bar height is between 104 and 109 centimetres? Neither did I. Did that information brighten your day? Didn't think so.

When the tubing arrived it had a galvanised look to it. I don't think it was mind, I think it was just a bit dirty. Part of me wanted to sand it all down to make it sexy and smooth, but I'm glad I left it now. You call that lazy, I'll call it Shabby Chic. The clamps and fixings arrived shortly after which meant we now had all of the necessities to give it a good old test fit. Scaffolding, I might add, is just Lego ( other building bricks are available ) for adults. If I ever get tired of Graphic Design there's a high chance I'll get into roof repairs just so I can play with this stuff all day.

The dimensions of the frame looked spot on, but when thinking towards the future, the introduction of bar stools is something that we may be interested in, and so in the interest of tucking everything away neatly like our good friend Ru Paul we took some length off the main horizontal bar. As the old saying goes; "Measure once, cut an indefinite amount of times." 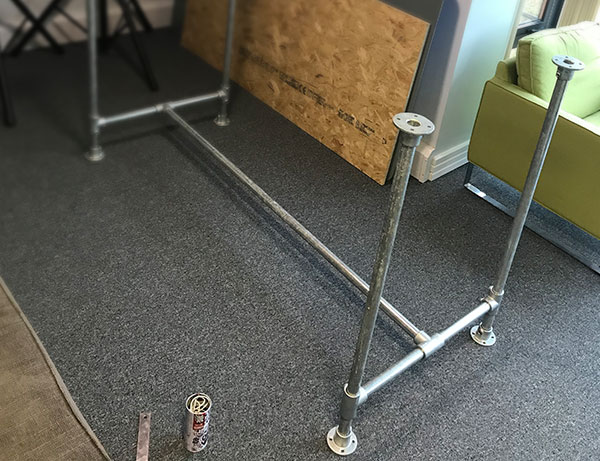 The frame looked perfect after a touch of cosmetic love; it felt high enough to stand at, and with enough room around the bottom should we ever decide to get some seat action on the go we shouldn't run into any problems. Next up we got some OSB ( Oriented strand board ) to give the sign a platform to rest on. After cutting it to size and sanding down the back of the sign I then used arguably too much adhesive, and, in the words of The Spice Girls - Two became one. To make surely sure that there wasn't going to be any flex during particularly arduous morning meetings, I affixed a slightly thinner strip of OSB to the centre section too. Which was then given an over-engineered wrath of love with as many screws as I could screw in before my wrists started burning. It was then left to cure. 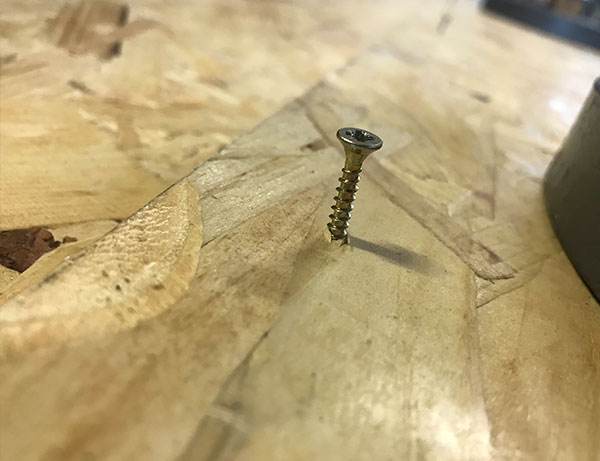 The next morning we set about removing all of the heavier bits of furniture we foraged from around the office to aid Gravity in helping the adhesive, then marked out and drilled the wall plates into each corner. All that was left was to flip it and attach it to the frame, and with that... A table was born. 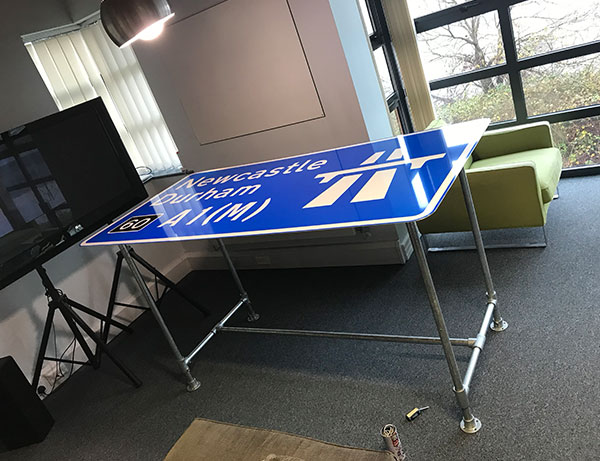 It's better than yours.